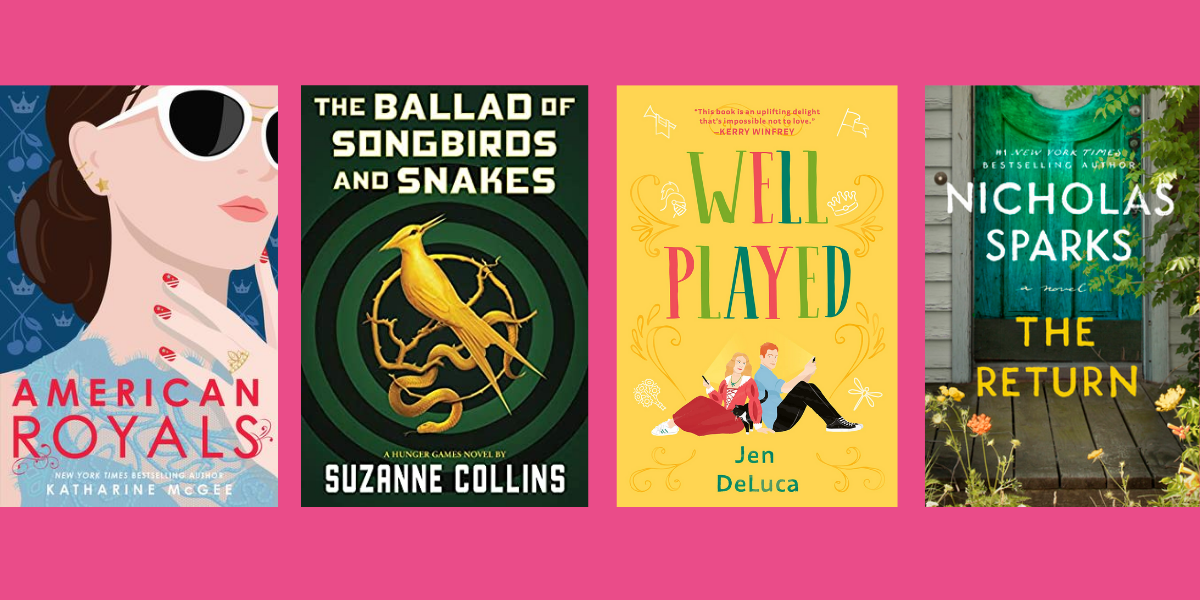 It will be September in two days! And as I’ll go into in my September newsletter (click HERE to subscribe!) it is FALL TIME. Fall is my absolute favorite season and among other things it means leaves, sweaters, leggings, pumpkin flavored everything….and reading in a comfy place with a window open, fuzzy socks and a blanket! I love reading all times of year, but there is just something about reading in the fall.

Since I’ll be wrapping up a book this month and truly starting September with a new book, I thought it’d be perfect to do a TBR for September! I’m truly excited for this month, with a new look at an old series, my favorite author’s newest release, the follow-up to my favorite book of the year AND a brand-new (to me!) book!

Goodreads Summary: What if America had a royal family?

When America won the Revolutionary War, its people offered General George Washington a crown. Two and a half centuries later, the House of Washington still sits on the throne.

As Princess Beatrice gets closer to becoming America’s first queen regnant, the duty she has embraced her entire life suddenly feels stifling.

As a self-proclaimed royal family addict, I am so looking forward to reading this book! Bonus, the sequel, Majesty, gets released on September 1, so if I love it, which I’m expecting to – I might be starting my October with the same series as September!

The Ballad of Songbirds and Snakes by Suzanne Collins

Goodreads Summary: It is the morning of the reaping that will kick off the tenth annual Hunger Games. In the Capital, eighteen-year-old Coriolanus Snow is preparing for his one shot at glory as a mentor in the Games. The once-mighty house of Snow has fallen on hard times, its fate hanging on the slender chance that Coriolanus will be able to outcharm, outwit, and outmaneuver his fellow students to mentor the winning tribute.

The odds are against him. He’s been given the humiliating assignment of mentoring the female tribute from District 12, the lowest of the low. Their fates are now completely intertwined — every choice Coriolanus makes could lead to favor or failure, triumph or ruin. Inside the arena, it will be a fight to the death. Outside the arena, Coriolanus starts to feel for his doomed tribute… and must weigh his need to follow the rules against his desire to survive no matter what it takes.

I loved The Hunger Games, and while I haven’t read the books in awhile (maybe a reread next month?), I am looking forward to this new look at Snow. It’s a take I didn’t expect, him being a mentor for the District 12 tribute. Since we know that Haymitch is the only District 12 victor and that was in the Quarter Quell, we already know that Snow’s tribute doesn’t come out victorious – which is just another interesting part I’m looking forward to seeing explored. While I haven’t heard the best about this prequel, I’m going into it with an open mind!

I CANNOT OVERSTATE MY EXCITEMENT FOR THIS BOOK. It is brand-new this month, releasing on September 22 and I am so happy that I read Well-Met, book number 1 in the series, so close to the release date of book 2.

Goodreads Summary: Stacey is jolted when her friends Simon and Emily get engaged. She knew she was putting her life on hold when she stayed in Willow Creek to care for her sick mother, but it’s been years now, and even though Stacey loves spending her summers pouring drinks and flirting with patrons at the local Renaissance Faire, she wants more out of life. Stacey vows to have her life figured out by the time her friends get hitched at Faire next summer. Maybe she’ll even find The One.

When Stacey imagined “The One,” it never occurred to her that her summertime Faire fling, Dex MacLean, might fit the bill. While Dex is easy on the eyes onstage with his band The Dueling Kilts, Stacey has never felt an emotional connection with him. So when she receives a tender email from the typically monosyllabic hunk, she’s not sure what to make of it.

Faire returns to Willow Creek, and Stacey comes face-to-face with the man with whom she’s exchanged hundreds of online messages over the past nine months. To Stacey’s shock, it isn’t Dex—she’s been falling in love with a man she barely knows.

Online love! The return of the Renaissance Faire! Emily and Simon getting married! I am just so so very excited for this book. Check out my review of Well-Met HERE and my excitement for Well-Played will make more sense.

The Return by Nicholas Sparks

Okay as cliche and cheesy as it is – and I know it is – my favorite author is Nicholas Sparks. From me frantically reading my way through his bibliography while in high school and getting each new release since then, I love his books. I know they’re predictable and I know they have similar storylines, but I also know that I have a book to enjoy and breathe in like air when he has a new one out!

Goodreads Summary: Trevor Benson never intended to move back to New Bern, NC. But when a mortar blast outside the hospital where he worked as an orthopedic surgeon sent him home from Afghanistan with devastating injuries, the dilapidated cabin he inherited from his grandfather seemed as good a place to regroup as any.

Tending to his grandfather’s beloved bee hives while gearing up for a second stint in medical school, Trevor isn’t prepared to fall in love with a local . . . and yet, from their very first encounter, his connection with Natalie Masterson can’t be ignored. But even as she seems to reciprocate his feelings, she remains frustratingly distant, making Trevor wonder what she’s hiding.

Further complicating his stay in New Bern is the presence of a sullen teenage girl, Callie, who lives in the trailer park down the road from his grandfather’s cabin. Claiming to be 19, she works at the local sundries store and keeps to herself. When he discovers she was once befriended by his grandfather, Trevor hopes Callie can shed light on the mysterious circumstances of his grandfather’s death, but she offers few clues — until a crisis triggers a race that will uncover the true nature of Callie’s past, one more intertwined with the elderly man’s passing than Trevor could ever have anticipated.

In his quest to unravel Natalie and Callie’s secrets, Trevor will learn the true meaning of love and forgiveness . . . and that in life, to move forward, we must often return to the place where it all began.

This novel is released at the very end of September on 9/29, but as I’ve typically finished his books in less than 48 hours, I very well may just get the full novel read this month!

Looking forward to quite the ambitious TBR this month! What are you reading?